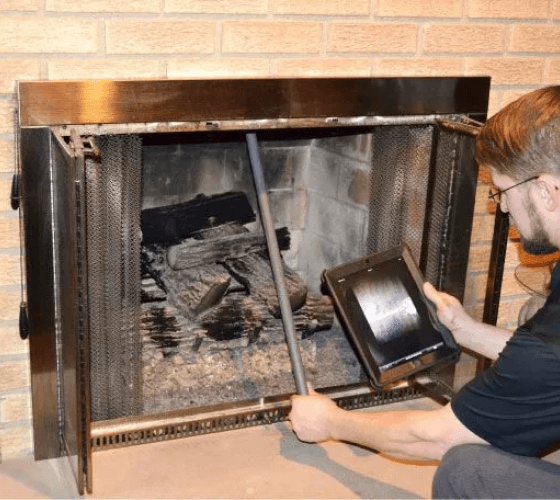 When wood burns in your fireplace or stove, it produces minerals and particles that are carried up into the chimney via the flue gases and smoke. As these flue gases cool in the chimney, they leave behind deposits in the form of creosote.

Creosote is a tacky or shiny tar-like substance that sticks to the flue liner or stove pipe and smoke chamber — and while this isn’t a problem initially, over time it can build up and cause serious issues. As this byproduct settles and cools as a black or brown deposit, it builds layer by layer, becomes harder, stickier, and more flammable. As it thickens and hardens, it becomes known as glazed creosote.

We ensure your chimney system is performing safely and efficiently

Your chimney system should allow you a safer, more comfortable life, and we want to make sure of it by providing you with all the services needed to keep your chimney in great shape. Everyone on our team is committed to continuously improving and adding to their skills and knowledge, and to providing courteous, honest, clean, and prompt service.

Our Team is Certified & Experienced

Firesafe Chimney Services, a full-time, full-service, family-run chimney service business dedicated to the continued safe use of every chimney in the area, was founded in 2005 by Derek Hannah. Derek’s father was a sweep with his own company, so Derek grew up working with his dad in the chimney business. When his dad shut down his business, Derek set out on his own and founded Firesafe Chimney Services.

Firesafe Chimney Services has a five-star rating on Facebook and our customers have come to count on us for dependable, clean, and quick service. We’re fully certified, licensed, and insured, and we pride ourselves on providing custom-tailored service to each and every client, each and every time.

We believe that education and training are key and allow us to provide better service and information to our clients. That’s why we make continued education, certification, and memberships with industry-leading associations a priority for our team.

When you need professional chimney and fireplace services in Central Massachusetts, call on Firesafe Chimney Services to be sure you’re getting the best possible service.

Split Up Your Payments

Upon inspection, we may discover that your chimney system is in need of repairs. With our financing options through EnerBank USA, you don't have to dip into your savings to keep your family safe.